Did you know there are over 900 different breeds of cows?  Thats a lot of breeds.  Early on in my illustrating process, I knew I had to decide which breed my character should be.  It took some research to help me decide.  This is what I found: 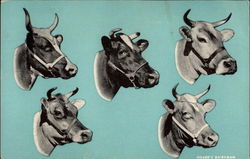 Many breeds of cows exist today. Historically, there was little distinction between dairy cows and cattle cows, although in recent times breeding and specialization have become more prevalent with aims of increasing production.  We can narrow down dairy cattle into six major breeds.  They include; Aryshire, Brown-Swiss, Guernsy, Holstein-Friesian, Jersey and Milking Shorthorn. 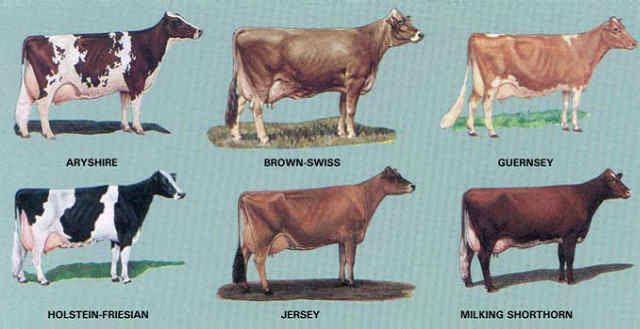 Holsteins are the most common breed and are known for outstanding milk production.  Holsteins are what most likely comes to mind when thinking about a dairy cow with their classic black and white markings.  These markings can also be red and white which is the expression of a recessive gene.

Milk produced from the Brown-Swiss breed contains a high amount of butterfat and protein which makes their milk excellent for making cheese.  They are large, but very docile. Their name comes from their origin in the Swiss Alps.  Years of breeding to withstand the harsh climate of the Alps have resulted in a breed that is resilient and strong.

Milk produced by the Guernsey are unique. The milk has a golden colour due to an exceptionally high content of beta carotene. At 5%, thir milk also has a high percentage of butterfat and a high protein content of 3.7. They are smaller which also translates to less feeding!

The Ayrshire cattle is a breed of dairy cattle originated from Ayrshire in Scotland.  They are medium sized, strong and rugged, and have reddish markings.  They are common in commercial dairies.  They would normally have long, upright horns, but they are usually dehorned as calves.

Jersey cattle are small. High butterfat conditions, 6% butterfat and 4% protein, and the ability to thrive on locally produced food. Jerseys come in all shades of brown, from light tan to almost black. They are frequently fawn in color.  They are calm and docile animals, but tend to be a bit more nervous than other dairy cow breeds. They are also highly recommended cows for first time owners and marginal pasture.  Their milk is often used for ice cream.

Milking Shorthorns are red, white, or red and white  and are one of the oldest recognized breeds.  They are docile, and are efficient producers of milk with high production.  Once, the most popular of dairy cows, the Milking Shorthorn has declined in popularity, giving way to other more popular breeds such as Holsteins.

At first I thought I would go with a Jersey cow.  They are beautiful and sweet looking.  But through the evolution of my drawings, I feel I need a cow that is in more contrast with the little girl.  Thus, the cow has evolved into a bigger, more stern looking cow.  Probably an Aryshire.  We’ll see.

2 thoughts on “Breeds of Dairy Cows”